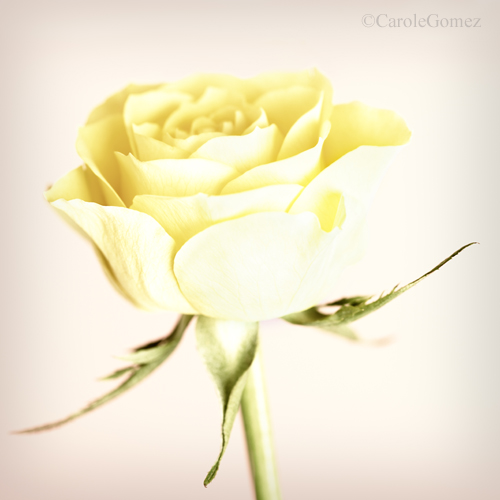 I know that the crazily warm weather we've been having this week can't last and I'm struggling to stop myself sowing all sorts of seeds that normally I wouldn't plant until the end of next month. It's so hard to think of frosty weather while I'm in shorts and t-shirt and watering the parched cracked earth. So I'm hedging my bets and have bean and winter squash seedlings that have germinated and are currently in the cold frame. If they survive in there for a few more weeks until the after the usual last frost date then I'll be very happy.

The warm weather has brought out one of my favourite free foods a little earlier than usual too. Stinging nettles (Urtica dioica) are fantastic to eat when young. They have lots of iron and vitamins, taste great and best of all they're free. It's best to pick them in the spring, before they get too big and tough and before they flower. I usually pick them up to about May, and I only pick the nice little top leaves. Obviously, you need gloves, a pair of scissors and a bag to pick and take them home to avoid getting stung. But as soon as they're cooked they lose their sting. You can use them in any recipe in place of spinach, I like making nettle lasagne, but here's a recipe for my favourite way of cooking with nettels, a frittata. 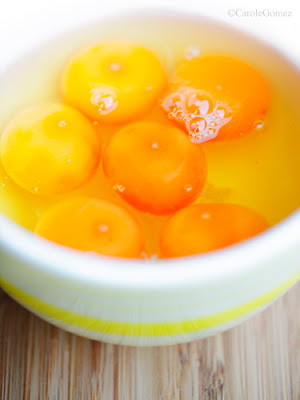 Serves 2 as a main course with a green salad

Peel the potatoes and cut in half if they are large. Bring a large pan of salted water to the boil & cook the potatoes until they are soft, but not falling apart (this will probably take about 10 minutes depending on the size of your potatoes). Meanwhile, finely slice the onion and fry in a frying pan in a table spoon of olive oil until softened but not brown. Transfer the cooked onion to a large bowl. Drain and slice the par-boiled potatoes as thinly as you can. If you don't have asbestos fingers like me you can leave them to cool before you do this. Add another tablespoon of olive oil to the frying pan and gently fry the potato slices in batches so that they're always cooking in one layer. Turn them before they brown, you're looking for cooked but not browned. Add a little more oil between batches if you need to. As each batch is done, add it to the bowl with the onions. Now for the nettles. Make sure you washed them well (aphids love nettles) and don't forget to keep your rubber gloves on while you're doing it. Still wearing gloves, remove the leaves from the stalks. Add a touch more olive oil to the frying pan and use the tongs to put the nettles in and then then cook them down for about 4 minutes. Once cooked they no longer sting and you can discard your gloves & tongs! Add the cooked nettles to the onion and potato. If you're using fresh peas, cook them in boiling water for a few minutes (if you're using frozen you can just pour some boiling water over them & leave for a few minutes). Add the peas to the bowl with the potato & onion. In a separate bowl, whisk up the eggs with a fork season with salt and lots of black pepper and tip the eggs into the bowl with the vegetables and mix well. Add a little more oil to your frying pan and when it's hot tip in the egg/vegetable mixture. Cook gently until the liquid has solidified. Then, if you're brave place a large plate over the frying pan, turn it over and then slide the frittata back into the pan to cook the other side for a couple of minutes. If you're a coward, put the frying pan under the grill to cook the top. Both methods work fine! 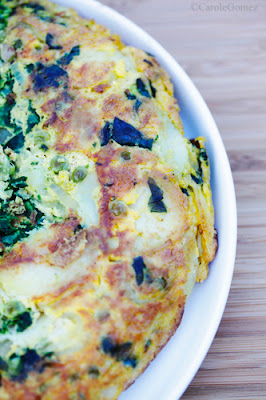 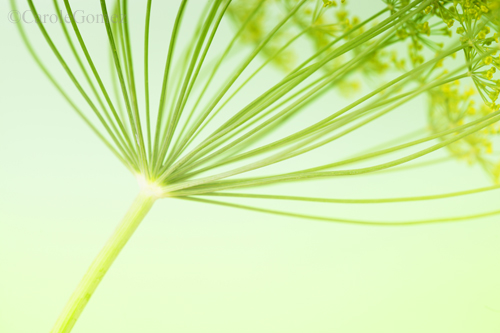 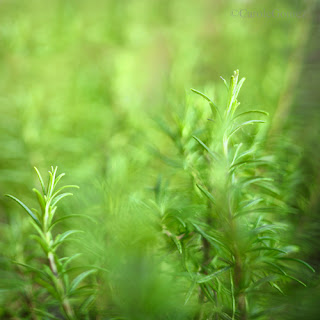 It's about this time of year that I get really impatient to start harvesting. The weather has been so warm this week, it felt like summer, but summer without the vegetable harvest. Most of the seeds are either still underground or in their packets waiting until all chance of frost has passed. The only things ready to eat in the garden at the moment are spinach and good old rosemary.

It's been raining all day today, good for the peas and parsnips seeds I planted this week, but not much good for anything else that needs to be done in the garden (like picking the spinach) Luckily I can lean out of the back door and pick rosemary while still keeping in the dry, so I made rosemary focaccia today. I am definitely a fair weather gardener. 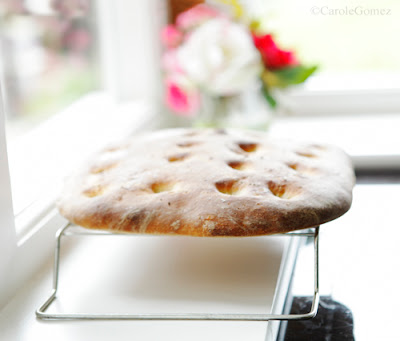 Makes one focaccia
500g strong white bread flour
5g powdered dry yeast
10g fine salt
325ml warm water
1 tablespoon of olive oil plus a little more for coating.
A few chopped rosemary leaves
flaky sea salt
Fit the dough hook into a food mixer and add the flour, yeast, salt and water into the mixer bowl. Mix until combined then add the oil and knead for 10 minutes until the dough is smooth and silky.  Tip out from the mixer bowl and shape into a round on a floured surface. Put it in an oiled bowl and cover (I have a plastic bin bag I use for this job, plastic bags seem to create the perfect conditions for the yeast to rise) Leave to rise somewhere warm for about an hour or however long it takes to double in size (the time will depend on the warmth of your room). When it's twice the size take it out of the bowl and place on a lightly oiled baking sheet. Press the dough into a flat rectangle. Press the dough lightly with your fingers all over. Cover it, and leave it to rise again for about an hour. Pre-heat your oven as high as it will go (about 250° C/Gas mark 10 usually) When the dough is ready it will have puffed up again. Poke your fingers (gently) into the dough, almost to the bottom, to make the characteristic dimples all over the bread. Drizzle the top with a little more olive oil, and sprinkle with a little sea salt and the chopped rosemary.

Bake for 10 minutes at the high temperature you'd set the oven to, then turn it down to 200° C/Gas mark 6 and cook for another 8-10 minutes. Leave to cool on a wire rack. 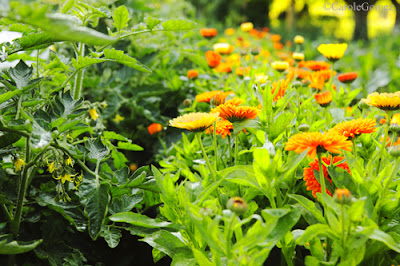 I grew lots of calendulas from seed last year as companion plants for my tomatoes. The photo on the right shows my tomato plant row with their pals the calendulars last July.
Companion planting involves growing specific plants next to each other so they assist each other in nutrient uptake, pest control, pollination, and other factors necessary to increase crop yield. Calendula is a good plant to use with tomato plants as a positive host (attracting beneficial insects that control pests like hover flies) and as a trap host because it attracts pests from the tomato crop. I also love them because they  make great cut flowers, the petals are delicious in salads and they seed themselves readily. 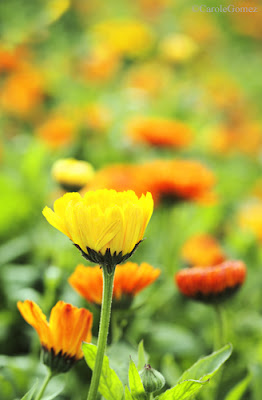 When we had the mad cold snap a few weeks ago I thought I’d lost the all self seeded ones that had sprung up on the paths of my allotment garden. When the snow melted all the leaves were black and several stems had shrivelled to nothing (a fate that also befell my autumn planted broad beans)  I checked them today and there are new leaves at the base of most of the plants. Hoorah!  The original plants from the seed packet were a wonderful mixture of colours from pale yellow through to hot orange. I’m very interested to see what colours the self seeded ones produce. I hope my broad bean plants will take note and resurrect themselves in a similar fashion!

As well as adding the petals to salads (you can eat the centre of the flower but it's bitter) you can also use them as a cheap alternative to saffron.  The petals have a peppery taste, but not as strong as nasturtiums.  I think the taste and the colour of the petals goes really well with orange salad.  Peel and remove the membrane from each segment of an orange. Thinly slice a red onion, and mix the orange and onion with some mixed salad greens, any type you like. Toast some sliced almonds and toss into the salad, add some washed calendular petals and dress with some olive oil and red wine vinegar. Delicious, colourful and very healthy!
Posted by Unknown at 11:48 No comments: 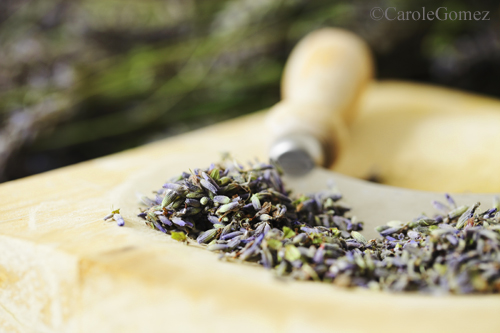 When the lavender in the garden was in full bloom last year I made some lavender & lemon shortbread. I loved its delicate floral taste. It wasn't to my husband's taste however, who declared it to be like eating soap. I suppose it's hard to break the mental link between the scent of lavender and bath products. Anyway, all the more shortbread for me!  There's not much growing in my garden at this time of year that I can use to make our usual plain shortbread a little more exciting. Nothing, that is, except the valiant rosemary which has looked healthy all winter. So I decided on a twist from the lavender and lemon and made rosemary and lemon shortbread which turned out to be entirely delicious (even if my husband still only wants the taste of butter in his shortbread). If you'd like to try the lavender version, just substitute it for the rosemary in the recipe below (and put all thoughts of your great aunt Maude's soap out of your head)

The shortbread recipe I use isn't like the traditional thick Scottish shortbread. I much prefer this version which is light and delicate and melts in your mouth. 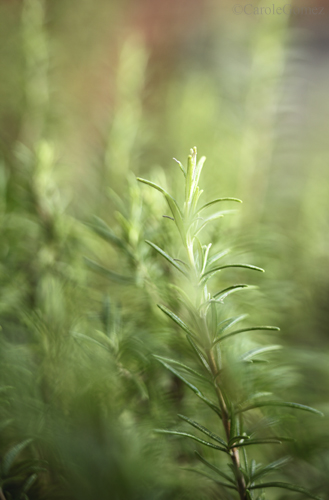 
In a food mixer (with the paddle beater attachment on) cream the butter and sugar together until very pale. Add the egg yolks, salt, lemon zest and rosemary. Beat for another minute then fold in the flour to make a soft dough. Flour a work surface and shape the dough into a wide flat disk. Wrap it in clingfilm and put in the fridge to firm up for about an hour. You can't cheat & skip this bit or it'll just fall apart.

Pre-heat the oven to 180°C/GM4. Unwrap and roll out the dough on a floured surface until it's about 3mm thick. Use a 6mm pastry cutter & stamp out as many as you can (should be about 24). Carefully transfer them using a wide knife to a non-stick baking sheet, or one that you've lined with baking parchment.


Bake for just 7-10 minutes until the edges are just starting to go golden but the middles are still pale. They will still be soft - don't panic...they firm up! Sprinkle a little more sugar on top of the still hot shortbread. Leave on the baking sheet for a couple of minutes and then transfer to a cooling rack.