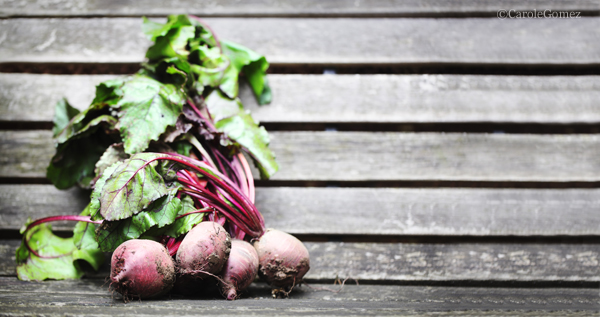 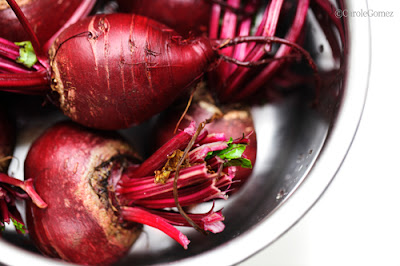 This has been pickling week in my kitchen. There's something very satisfying about seeing rows of jars of home pickled vegetables in my kitchen cupboards.  Every year I try to set some aside to give as Yule gifts but I always eat them myself!

If you're thinking, bleugh, I hate pickled beetroot, I suspect that you were forced to eat the really acidic shop bought stuff. Forget that horrible, proper pickled beetroot is just the most delicious thing.

The flavour of beetroot is quite delicate, earthy and sweet. It’s one of my favourite vegetables because it’s easy to grow and you can use every last bit of it, including the leaves. You don’t even have to cook it, it’s lovely grated raw in salads. Just cut the tops off  (but don’t throw them away, use them just like spinach!) peel with a potato peeler and grate.  The pigment in beetroot turns brown fairly quickly when exposed to light, so make it one of the last ingredients you add to a salad before serving. I think the sweetness of raw beetroot has an affinity with raw carrot, they work very well together in a salad. 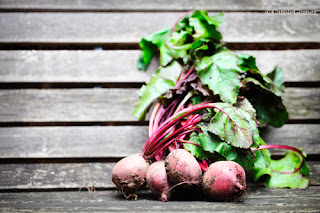 How to Grow Beetroot

You can sow beetroot seeds directly into the soil from April to July (in the UK) . It’s a good idea to sow a few rows a 3 weeks apart. That way you won’t end up with a pile of beetroots all ready to eat on one day and none for the rest of the summer

Dig the soil, remove weeds and large stones. Rake the soil after digging to leave a fine finish.  Take a bamboo cane and drag it though the prepared soil to make a trench that’s 2cm deep (0.75 in). Pop one seed into the trench every 10cm (4 in). When you get to the end of the row, cover the trench with soil and water well.  Put a marker at the end of the row to remind you that you’ve planted something there, and what it is. Keep the seed packet for future reference.

When the seedlings are about 2cm (0.75 in) tall, it’s time to be cruel to be kind. Even though you spaced the seeds out, inevitably some will have moved and will be annoying their neighbours. Carefully pull out any anti-social ones so that there is one seedling every 10cm (4in). It might seem harsh, but when they’re all crowded together no one gets enough water, light or space.

That’s all you need to do. Water them when the weather is dry, and remove any weeds. Depending on the variety you bought (check the seed packet) they’re usually ready in about 3 months from sowing. I like to pick mine when they’re still quite small, about half way between the size of a golf and tennis ball.

Here's the recipe I've used for ages for pickling beets. Don't be put off by the olive oil. I know it sounds odd to have it in a pickling recipe, but it really takes the flavours to another dimension. I usually double this recipe.

Twist off the leaves (the colour bleeds if you cut them) and wash the beets in cold water. Leave the little roots on, if you cut them off the colour leeches out.  Place the beets in a large saucepan of water with 1 tablespoon of salt.  Bring the water to the boil and cook the beets until they are tender (usually about 20 minutes but it depends how big your beets are)  Remove the beets from the pan and set them aside to cool.  Once cooled, pick each one up with a piece of absorbant kitchen paper & gently rub the skin to remove it. Cut them into wedges or slices, whichever you like.

Put all the pickling vinegar ingredients into a small saucepan and bring the mixture to the boil.  Reduce the heat and let the liquid simmer for 5 minutes. Leave to cool a little and then strain.

Fill sterilised jars with the cooked beets and top up with the pickling liquid. That's it, done! 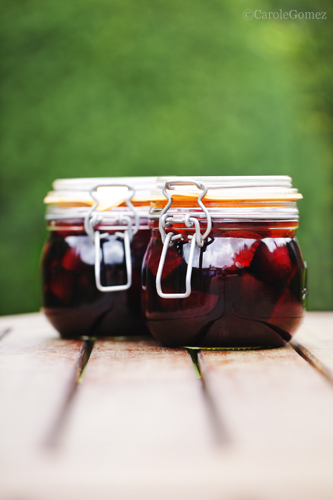 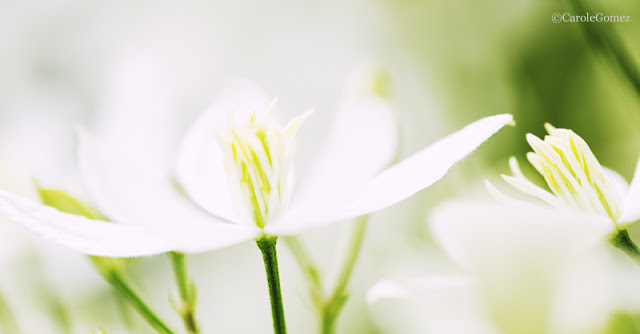 The current glut in my vegetable garden is artichokes. A very nice glut to have. I'd never eaten a fresh artichoke until last year, I liked the little artichoke hearts you can buy in tins and jars and thought I'd give growing them a go. I hadn't realised how much more there is to eat from an artichoke than you get in the jar & bottles. The "petals" are delicious, if a bit fiddly to eat. It's like a reverse tardis vegetable, there's so much more of it left when you've finished eating than when you started. Saturday artichoke lunches have become our July ritual, so we can devote the required amount of time to eat and enjoy them. 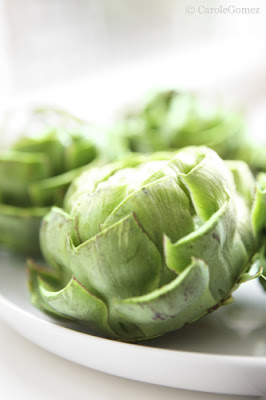 I'm almost embarrassed to share my favourite artichoke dip recipe, because it hardly counts as a recipe. It's as delicious as it is simple, although I suppose if you want to be really good you could make your own mayonnaise.

For the dip :
2 cups of mayonnaise
2 tablespoons of balsamic vinegar

The artichokes themselves aren't much more complicated but it'll make me feel like this blog entry is more of a cooking based one if I share how to do it for those who haven't yet tried.

Au-naturelle, straight from the garden the petals of the artichokes have pointy thorned ends. Snip these pointy end bits off with scissors for the larger petals (see photo on left). If you're buying them fresh the seller may have done this bit for you. Cut off the stem so that it's almost flush with the base so it can sit upright during cooking. Add a little squeeze of lemon juice and a couple of bay leaves to the pan and steam until you can pull a petal off easily (usually somewhere between 25 - 45 minutes depending on how big they are). So, now you have perfectly cooked artichokes, how to eat them? Pull off the petals one at a time, dip the fat fleshy end into your dip, put it in your mouth and pull it through your teeth to extract the pulpy flesh inside. When you've eaten all the petals, you're left with the inside. Use a spoon or a knife to remove the fibrous fuzzy part called the choke. That bit isn't edible. Add it to your pile of detritus from the petals! What you're left with underneath all that fibre is the heart, which you can then cut up and use to scoop up the last of the dip. 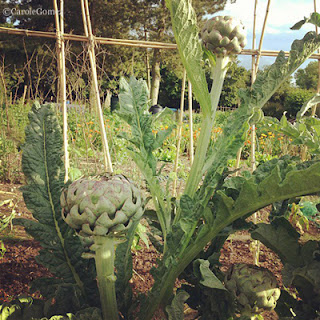 A Spatula in a Gun Fight

I've been looking after my Mother (who lives with us) since she was recently diagnosed with Non-Hodgkin lymphoma, which is a type of blood cancer. We've launched ourselves into a new world of chemotherapy and even just two months in we've learnt so much and met some amazing people. Most people think of hair loss as the main side effect of chemotherapy. It's an aggressive therapy, and as much as she loved her hair, weight loss and loss of appetite are our main issues. For some people undergoing chemotherapy, or even just as a symptom of their cancer, lack of appetite and rapid weight loss are serious problems. Chemotherapy can also give you a sore, ulcerated mouth, which makes you even less inclined to eat. It can also change the way you taste food, things you loved before you might hate, or you might find everything seems bland and tasteless to you.

As my Mother's weight loss is so severe, finding something she will eat has become my all-consuming mission! Strawberries have been the hero of the menu in the last two weeks. Our garden is full to bursting with ripe strawberries now, and they're soft enough not to hurt her sore mouth, and sweet enough for her to taste. But, filling up on strawberries isn't helping me in the fight to put back some of the 56 lbs (26 kgs) she has lost in the last few months. So, I've been making jam like crazy. I'd love to get her to eat something with iron, and protein but currently even just a strawberry is a small victory. I feel like I've got a spatula in a gun fight. So, Sunday was spent jam making, which I now hope to use to tempt her into eating things like creamy rice puddings with swirls of jam. Even just scooping jam from the jar. 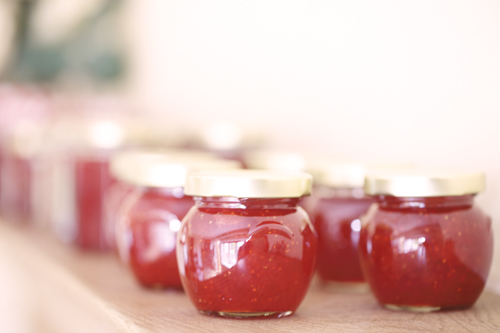 While we were at her last chemotherapy session a medical photographer from the hospital asked if she could take some photos of my Mother having chemotherapy for their fund raising literature. We talked about how much more equipment they need, and their hopes for moving to a larger unit next year. I've decided to have a bake sale to raise funds for the chemotherapy unit. I'm planning to do it in September, but already it's giving me sleepless nights! I've never frozen cakes before, I can't believe how conflicting the advice is about de-frosting them (wrapping on or off? ). I can't hope to make enough the day before the bake sale, so most will need to be made in advance and frozen. I think I'm going to have to bake some trial cakes to freeze & defrost just to see which of the advice on the interwebs is correct. My husband pointed out that by the time I've done all this I'd have been better off just donating the cost of all the ingredients! I'm hoping to prove him wrong, home-made cakes have extra love in them that people will pay for, right?

I've made this strawberry jam recipe from Silver Spoon for years. It's a never fail, no worry jam recipe that tastes like a burst of sunshine in every spoonful. It does taste extra special if you pick the strawberries when they are warm from the sun and make the jam straight away.

800g hulled strawberries (that's about 900g of unprepared fruit)
1kg jam sugar (this is sugar with added apple pectin for fruits like strawberries that are low in pectin, I always use Silver Spoon jam sugar)
a knob of butter

Mash the fruit with a potato masher and put them in a large saucepan.  Add the jam sugar and heat gently stirring all the time until the sugar dissolves. Make sure it doesn't boil yet. Add the butter when the sugar has dissolved and then turn up the heat. Keep stirring, bring it all to a full roiling boil (so that it bubbles and rises in the pan and cannot be stirred down). Then either insert a food thermometer (I love my digital one) and keep boiling and stirring until it reaches 105 degrees C, or if you don't have a food thermometer, start timing when it reaches a real full rolling boil and keep it going for 4 minutes (no more, no less!). Remove from the heat and pour (I have a great metal funnel that sits inside my jam jars to help this proess) into steralised jam jars (about 4 normal sized ones) and put the lids on tight while the jam is still hot. Feel free to pat yourself on the back whenever you open a jar for your breakfast. 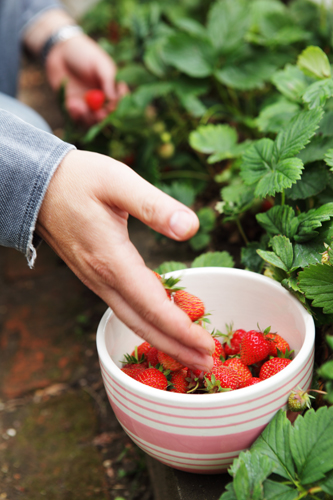