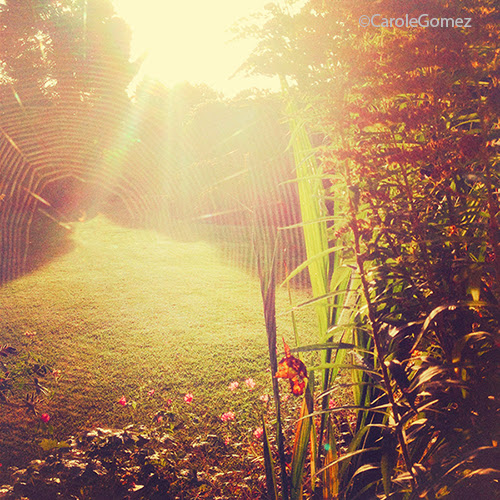 Now is about the time of year I like to make my Christmas cake, which I’ll now call  my Yule cake as I don’t celebrate Christmas, but I thought I’d start out calling it that so we all know what I’m talking about!

I know it seems a long way off yet but I think all the best fruit cakes are fed with alcohol for a few months before being decorated.  Yule, or the winter solstice, is on the 21st of December, and happily many pagan customs for Yule, like decorating houses with evergreens, yule logs and hanging mistletoe have been incorporated into the Christian celebration of Christmas.  So, whether you’ll be eating yours on the 21st or the 25th of December now is the time to make your cake!

The hardest part of the whole process is deciding whether to feed your cake with brandy, whisky or rum.  I opted for brandy this year, but as soon as I’d made it I remembered the bottle of  black cherry flavoured Jim Beam bourbon that’s been in my fridge since the summer. I wish I’d remembered it before (it’s hidden at the back of fridge by a fortress of various opened home-made jams and if I can't see it, I forget all about it) I think it would have been lovely in this cake. At the rate I’m (not) drinking it there’ll be lots left for next year’s cake! 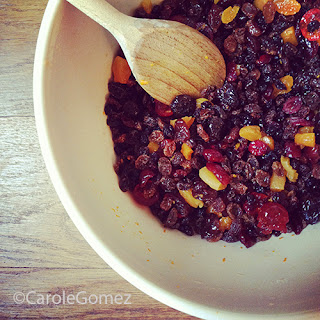 Here’s how I make my cake.  Start two days before you want to bake.  Add all the dried fruit and clementine juice and zest to a big bowl and pour in the alcohol of your choice.  Stir then cover and leave to soak for two days, give it a stir now and then.  It’s fine to substitute any of the dried fruits for another as long as you use the same weight. I often swap currants for more cranberries or sultanas because I’m not overly keen on currants. You could use dates, candied peel… the combinations are endless
125g glace cherries, cut in half
100g dried apricots, quartered
200g currants
200g sultanas
200g raisins
100g dried sour cherries
100g dried cranberries
Grated zest and juice of four clementines
150ml brandy, whisky, rum… whatever takes your fancy


Two days later…
You’ll need a 20cm round (or 18cm square) loose bottomed or spring form cake tin. Butter the tin and double line it with baking parchment. I know double lining sounds like a hassle, but it’s important because the cake needs long slow cooking and you don’t want any of the fruit on the outside burning as it’ll taste bitter. To make it a bit more of a chore, brown paper also needs to be tied around the outside of the tin and secured with string. As it happened I’d forgotten about this part this year and didn’t have any brown paper, so I improvised with some aluminium foil turned shiny side in. It worked fine, but brown paper is better. You’ll also need a circle of baking parchment to add as a lid for the cake during the second part of baking.

That’s the boring bit done. I really hate lining tins, so if you're getting bored or annoyed while lining yours, I feel your pain.  Here are the ingredients for the next exciting bit:

Beat the butter and sugar together in a bowl until they are creamy (hoorah for my Kitchen Aid which leaves me free to have a cup of tea while that’s going on! If only it came with a "line my cake tin attachment)  Add the vanilla extract and then the eggs one at a time, beating between well each one. Add the flour and mixed spice, mix to combine, then add all the fruit and any dribbles of the booze at the bottom of the bowl. Mix well again then pour into the prepared baking tin.  Make a little dent using a spoon in the middle of the cake, then put in the oven for 80 minutes.  Reduce the oven temperature to 140c/275f, pop a circle of baking parchment on as a lid for another 40-60 minutes or until a skewer inserted in the middle of the cake comes out clean.  Cool the cake in the tin, then wrap in parchment and keep in an airtight container in a cool dark place. Feed it with a spoonful of alcohol every couple of weeks.  Reward yourself with a spoonful while you’re at it, for being so organised. 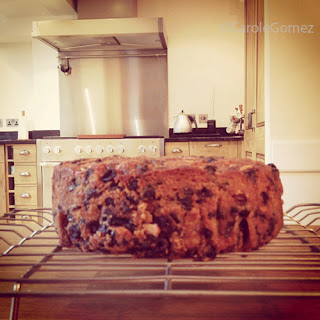